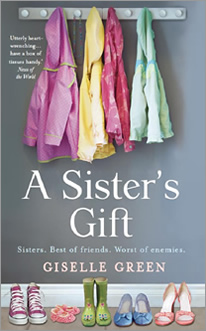 Two sisters. Best of friends. Worst of enemies. Hollie Hudson and her husband Richard are fast losing hope of ever having their own child.
But Hollie is unable to give up her dream of having her own family and so calls on her last chance – her wayward sister, Scarlett. A 24-year-old blonde bombshell, she is the antithesis of her darker, more reserved older sister but capable of giving Hollie the miracle she so desperately desires. Having been almost single-handedly brought up by her sister after their runaway mother abandoned them, Scarlett knows she owes Hollie everything – and now it’s time to pay her back with the ultimate gift! Plus she has an ulterior motive. Back from the Amazon where she’s been working with endangered species and threatened tribes, Scarlett finds being back home difficult. Especially as the past – and past feelings – come back to haunt her.

Meanwhile, an ever-desperate Hollie is faced with the decision of a lifetime if she’s ever to get the baby she wants, but just how much is she willing to put at stake? Find out more in this mesmerising and heartbreaking tale about sacrifice, sisterhood, long-held secrets and dangerous desires